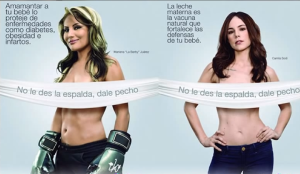 The National Ad Council here in the US took a similar approach just a few years ago (with “regular” looking women rather than models) and was similarly controversial. One of its taglines was, “You wouldn’t take risks before your baby’s born. Why start now?” and it played video clips of pregnant women riding mechanical bulls and competing in log rolling contests (showing how absurd such risky activities would be when pregnant) , followed by information about the protective properties of breastmilk, leading to the transference of the idea that formula feeding is risky, too. Actually, the *original* ads that the Ad Council created to be played were never run–they used risk terminology, such as “Babies who are not breastfed are more likely to get ear infections…” rather than “Babies who are breastfed are less likely to get ear infections” but they were deemed too guilt-inducing, so the voice-overs in the ads that were played on TV (linked below) talk about reducing risks by breastfeeding, rather than creating risks by formula feeding.

Ironically, a bit of guilt is what the ad creators were going for. Research done prior to the creation of the ads showed that mothers who chose not to breastfeed without ever trying (not mothers who attempted to breastfeed but ran into problems and eventually quit) already knew about the “benefits” of breastfeeding but chose to formula feed from the start because they didn’t see formula as having risks, just breastfeeding as having that “extra” something that wasn’t worth the effort…just like we have heard that organic apples contain more nutrition than “conventionally” grown apples…but non-organic apples are seen as quite healthy. The ads attempt to show that comparing breastmilk to formula is like comparing apples to oranges, because formula carries risks. The studies done in preparation for the creation of the ads showed that when most mothers who were originally interested in formula feeding were informed that there were risks involved in doing so, they wanted to breastfeed. The “risk” approach seemed to be more effective than the “benefit” approach.

Whenever we talk about risks, we are looking at the big G word; Guilt. Mothers faced with accurate information about the facts of breastfeeding choose to offer their baby breastmilk because they would feel guilty to give them something that would cause problems. However, most of us flinch at the thought of telling a currently formula feeding mom that her baby has a higher risk of upper respiratory infections, ear infections, GI diseases, cancers, higher adult blood pressure, etc, because we don’t want her to feel bad about things she can’t change…and it is impossible to inform pregnant and future mothers about the importance of breastfeeding out of the earshot of mothers who have already formula fed their babies; it is easier to tell mothers that breastfeeding offers benefits because benefits don’t induce guilt.

I don’t want moms feeling guilt. No mom should feel guilty for feeding her baby formula or donor milk when her baby cannot get milk properly from her breasts and no mom should feel guilty about decisions made without full understanding about the differences between breastmilk and formula. As the late Maya Anjelou said, “I did then what I knew how to do. Now that I know better, I do better.” When a mother understands the difference between formula and breastmilk and still chooses to formula feed from birth, I trust that she knows more than I do about her family situation. When a mother chooses what she believes is best based on the information she has, she should also feel no guilt. We should all have the freedom to weigh our options and choose what is best…but we do need all of the facts before we can make an educated decision.

Another point of contention with the new campaign other than the “guilt” slogan “Don’t turn your back,” is the absence of a nursing baby and the use of sexy models rather than “regular” mothers. I am not sure why they chose to have a sexy campaign. In the United States, we are constantly working against the concept that breasts, being sexual objects, are therefore awkward to use to nurture and feed a baby, especially in public, so I would have rather seen a nursing baby in those photos. I wonder if the ad creators thought models would call more attention to the message than a nursing mother…but I don’t know what their research or what their thought process was as they made the decisions that they did.

Breastfeeding promotion is tricky! We don’t want to create “Mommy wars” but we also don’t want to undermine breastfeeding or stick our head in the sand. What do you think of Mexico’s new, controversial breastfeeding campaign? Are they on the right track or did they go over the edge with the words, “Don’t turn your back”?